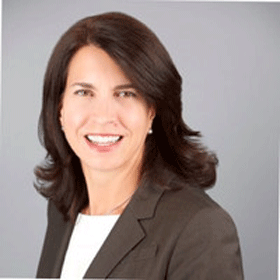 Joana is an accomplished executive with over 20 years in banking and financial services. Her broad areas of expertise include investment banking and private equity, including mergers, acquisitions, leveraged buyouts, restructuring, equity and debt financing, and business development/deal origination.

A founding member of the SMBC Nikko Investment Banking team, Joana leads coverage of middle market financial sponsors, focusing on originating M&A advisory assignments, equity capital market transactions and acquisition financing, high yield securities and bridge financings for portfolio companies across a broad array of sectors. Joana originated and helped execute the first sell-side M&A transaction for the team in North America, contributing to over 30% of the team’s fee income for its first year. Prior to joining SMBC Nikko, she co-founded and led SMBC’s middle market leveraged finance group in North America. Joana developed and implemented the growth strategy for the group and drove key business activities that resulted in a portfolio of $1.5B. During her tenure, the team became one of the most active lenders in the US middle market, consistently ranked in the top of the league tables.

Previously, Joana held positions with the Energy and Project Finance teams at SMBC, building and managing banking relationships with senior C-suite executives. Prior to joining SMBC, she held several finance functions at a global energy firm, including new product development and financing multi-billio- -dollar pipeline and power projects in India, Brazil and Bolivia.

As a leader of SMBC’s Women’s Inclusion Network (WIN) and a Co-Chair of the Mentoring Committee, Joana created and implemented the firm’s first formal mentoring program. She also serves on the Women of Leadership Committee for Association of Corporate Growth (ACG), the premier association in New York for middle market financing and advisory professionals. In 2018, Joana was named one of 27 Women inPower Fellows by the 92nd Street Y’s Belfer Center for Innovation & Social Impact, a program focused on advancing women in diverse sectors to the highest levels of leadership.

Outside of work, Joana is active in her community and various non-profits, serving as a Girl Scout troop leader and as a volunteer editor and Portuguese translator for Kiva, the microfinance lender. Joana is passionate about health and fitness, and has completed four Ironmans and multiple marathons. Born in Brazil, she is a native speaker of Portuguese and fluent in German.