August marks the one-year anniversary when Chantae Jones began attending UPS’ Day Hab Without Walls Program. In that time, our staff has watched Chantae flourish in the community, working closely with her to develop socialization skills and enhance her independence. 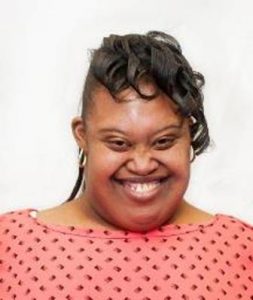 Participating in Day Hab activities has been a vital part of building Chantae’s confidence and helping her thrive. One of her favorite activities includes delivering mail to the various Bronx programs. She’s developed a warm relationship with many along her route and cherishes the interaction.

Whether Chantae’s assisting with cleaning tasks, performing office work or collecting bottles for recycling, her enthusiasm has grown significantly. Thanks to Day Hab Without Walls, she has experienced a strong sense of accomplishment, greater structure, and familiarity with routines.

Chantae always remains positive in any situation and encourages everyone around her. Having achieved such incredible growth in a short amount of time is inspirational to many at UPS.”Only a year ago, Chantae was a different person. She wasn’t as outgoing as she is now,” recalls Vanessa Pierre, direct support professional at UPS. “She was hesitant about participating in activities. Now, she shows others how it’s done!”

Whatever activity Chantae performs, she does it with pride, especially the pictures she draws during Arts and Crafts, many of which are displayed at UPS. And if there’s an opportunity to display her dance moves, Chantae jumps at the chance.
“When we took individuals to UniverSoul Circus in April, Chantae performed on stage,” Vanessa recalls. “And it wasn’t the first time she danced in front of a crowd!”

Chantae’s spirit is matched by her warmth and compassion. When she enters the room, she’s quick to say hello or pay someone a compliment. If you’re having a tough day, you can always count on her for a hug. “Chantae brightens the day of everyone around her,” Vanessa remarks.

So what’s next for Chantae? She’ll soon be moving out of her father’s home and into one of UPS’ new IRA developments (date to be announced). At Day Hab, her newest goals include telling time and learning money management skills. With her positive attitude and boundless energy, we know she will succeed in everything she does!

Please join the UPS team in congratulating Chantae Jones as our Individual of the Month!